Engelhard is a metal-producing company that has been in existence in the United States since 2 years after the turn of the 20th century. Charles Engelhard, in 1902, decided to buy the Charles Croselmire Company and renamed it the American Platinum Works only a year later. The original facility was located conveniently adjacent to the Atlantic Ocean. Just a few years after Engelhard took over the reins of the company it was one of the world’s largest fabricators of platinum, silver, and gold.

Fast forward about 50 years and the company was then controlled by Charles Engelhard’s son, Charles Jr. Charles Jr. renamed the company yet again, this time turning it into Engelhard Industries Incorporated and ushered the organization onto the New York Stock Exchange.

The company thrived immediately after it went public and because of that success was able to purchase a number of different mineral and chemical companies. As fate would have it, however, Engelhard was recently purchased by a metals company themselves; a company named BASF from Germany.

Even though Engelhard did not keep their Newark home, they never left the state of New Jersey which was a great way of staying true to their roots.

Engelhard was and is still most well-known for their variety of silver bars. They produced bars of all sizes for a number of years which has satisfied investors for decades on end. The sizes of their silver bullion bars range from being as small as 1 ounce to as massive as the 100 ounce variety. 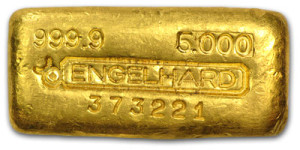 People buy into Engelhard for two main reasons. For one, their company had been in existence for over a century meaning they can be trusted in every sense of the word. The second reason people love Engelhard bars is a relatively new one and that is because the company no longer exists. Because Engelhard bars are not being produced on the massive scale that many people were used to, the bars that remain on the open market are going for higher prices because of their impending scarcity.

Engelhard was known for producing the highest quality silver bars and because this reputation resonates true even today it is no surprise that investors of all types have been, and still are, clambering to get their hands on these bars.

Premiums on any type of precious metal come as a drag to just about any and all investors. You will be hard-pressed to ever find a bullion dealer selling silver, gold, or any other metal at or under its spot value. Engelhard bars are no different and as a matter of fact, Engelhard bars are experiencing rising premiums ever since their company was purchased by BASF.

Because Engelhard bars are going to be increasingly more difficult to come across, companies and dealers know that they will be able to charge more for their bars and still have plenty of buyers. There is no set, specific premium for Engelhard silver bars which makes it imperative that you do some competitive shopping between sites before settling down and making a purchase. Being a competitive shopper ensures that you will make your money go as far as it possibly can.